The Redcliffe High Performance Centre with a Spantech 300 Series roof over the main Olympic swimming pool. 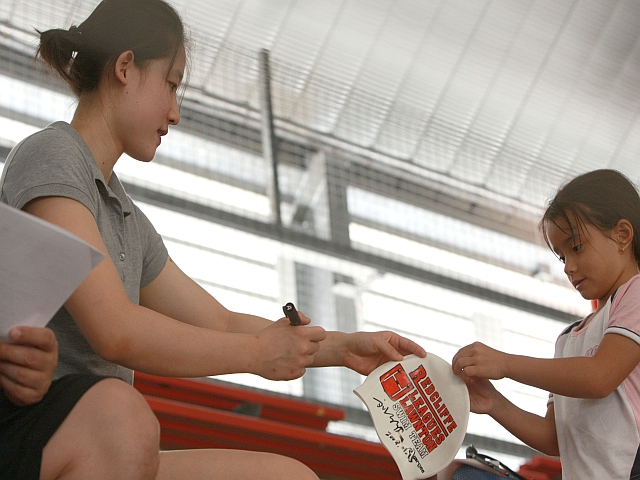 Liu Zige signs a cap for a club swimmer in 2010. The clean lines of the Spantech 300 series roof can be seen behind the two swimmers.
Photo: www.kenwoodswimming.com

Spantech worked closely with Ken Wood during the construction to ensure his team’s training schedule was not interrupted.

The asymmetrical roof was designed to accommodate the existing features of the pool. One side of the main roof rises from columns fixed the back of the large existing grandstand.  The side other is supported by round columns separated by clear retractable cafe blinds.

A smaller roof extends to the south covering the 18m long learn to swim pool.

The building has a very low whole-of-life cost. Firstly the facility construction costs were significantly lower than the Council’s original budget. Secondly, the ongoing maintenance is minimal and the cost of heating and chemicals has been reduced since the building was constructed. On the other side of the ledger, attendance has dramatically increased, particularly in the profitable learn to swim classes. Overall patronage has also increased during winter months.

Spantech was contracted to design and construct an indoor equestrian centre for Unicorn Park Stud and Equestrian Centre. Read more.

Construction of a shade structure covering a 25 metre swimming pool which extends over a dividing block wall to also cover a single basketball court. A second high level shade structure was also constructed over the primary school quadrant which is surrounded by existing two storey classrooms. Read more.

Lismore City Council awarded Spantech a turn-key contract to design and construct the Goonellabah Sports and Aquatic Centre. Mayor of Lismore Councillor Jenny Dowell said it was "the biggest single project ever undertaken by the Council". Read more.

Design and construction of the full enclosure of an existing pool. Spantech was awarded the project on price. Read more.

Spantech has been contracted to construct The Parkinson Aquatic Centre at 751 Algester Road, Parkinson for the Brisbane City Council. Read more.

Spantech designed a concept for the ADF for a new Health & Wellbeing Centre at Puckapunyal. Read more.

Design and construction of an enclosure over an existing 18 metre learn to swim pool. The structure features counter weighted glass doors which span between concrete buttress supports on three sides of the structure. Read more.